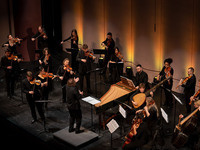 Mercury was founded in 2000 as an intimate chamber orchestra with a goal to enrich and entertain Houston audiences with a broad repertoire of music on period instruments. Now in its 19th season, Mercury performs more than fifty concerts a year at unique venues around Houston and touring throughout Texas and beyond, bringing intimate chamber performances to enthusiastic audiences. With Antoine Plante, founder and Artistic Director, at the helm, Mercury garners critical acclaim with an approachable, fresh and exciting interpretation of classical music.