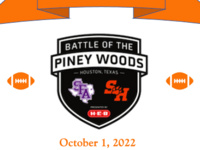 Battle of the Piney Woods

You're not going yet!