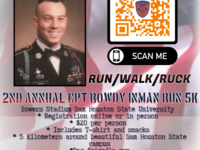 This run is in remembrance of Captain Rowdy J. Inman, a Sam Houston State University alumnus who paid the ultimate sacrifice on 26 December 2007. Captain Rowdy was the first SHSU ROTC graduate to die in combat while he was with the US 3rd Armored Calvary Regiment during Operation Iraqi Freedom. Captain Inman was also a veteran of Operation Desert Storm and Operation Just Cause, earning many accommodations including the bronze star with oak leaf cluster, the purple heart, and the meritorious service medal with oak leaf cluster.

You're not going yet!

Buy Tickets
This event content is powered by the Localist Community Event Platform.