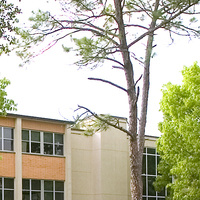 The Evans Complex is a four-story classroom and office building along the western edge of the quadrangle. Originally constructed as two separate buildings for music and English classes, the complex was created in the late-1980s after the buildings were remodeled and bridged together. The complex now houses the Department of English.

The Texas Review, a literary journal founded by the late Distinguished Professor of English Paul Ruffin and first published in 1976 (as The Sam Houston Literary Review), has headquarters and offices on the ground floor.

The complex also includes an auditorium on the first floor (room 105), named after Professor Emeritus of English Ralph W. Pease

The large cedar tree in the garden behind the complex served as the original university Tree of Light (1921-66).