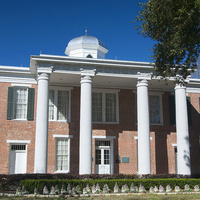 Austin College initially occupied the current site of Sam Houston State University. In 1876 it was moved to Sherman, Texas, but Austin Hall, which was dedicated in 1851 with Texas hero Sam Houston in attendance, is now the university's architectural symbol. First used in October 1852, Austin Hall is the oldest continuously-used state-owned higher education facility west of the Mississippi.